Updates on v0.5 and Beyond

Hello burrowers! I've got lots of updates and progress to share regarding v0.5 and plans for Maze Burrow going forwards. Let's jump right in!

v0.5 will feature a short introductory cutscene showing the game's premise and also serving as the first level. You'll be able to watch it as many times as you wish by selecting it in the overworld. Expect more cutscenes in the future!

I wrote a particle system for Maze Burrow and have been having fun creating visual effects. Here's some of what to expect:

Rocks that moles throw have trails too!

Let's not forget blocks! The color of their particles changes depending on the surface the block is moving on.

Review your progress across all worlds with the Totals Screen, accessible from the pause menu on the overworld map. 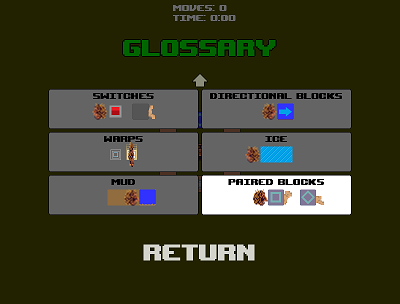 Forget what something in a level does? Check out the Glossary, which contains demonstrations of each puzzle element you've encountered. You can access this handy reference from the pause menu in a level.

In addition to bug fixes, v0.5 will feature a few enhancements to gameplay, including the ability to push and pull Paired Blocks in positions previously not possible. Example includes pulling a Paired Block when you're sandwiched between the pairs, and pushing two Paired Blocks stacked next to each other.

Unfortunately, I've decided that pre-alpha v0.5 will be the last version available on macOS for the time being. I do not feel confident shipping Maze Burrow to a platform I don't have direct access to, and with macOS 10.15 Catalina having more restrictions and requirements on applications, I'll need to have the OS handy to properly test and package the game on it. At the moment, I cannot get access to macOS, so I'll be focusing on Windows and Linux at least until launch. I know this is disappointing for macOS users, but I hope you understand and will continue to support Maze Burrow's development.

After v0.5, Maze Burrow will be mostly feature complete and in alpha! I've planned out how I want the game to proceed with regards to puzzles from hereon out. There will be a total of at least 70 levels across 7 worlds, with each world focusing on a different puzzle element. For instance, world 1 would focus on standard blocks while world 2 would focus on switches. I believe this will give me more room to fully explore each of Maze Burrow's mechanics and provide players with plenty of interesting and fun puzzles to solve. As of v0.4, there are 45 levels, so excluding revisions, I'm already over halfway done!

There will also be less frequent builds until an eventual cut-off point when I feel confident in the game and am polishing it for release.

I am also looking to improve Maze Burrow's art by adding more to the environment. I don't have any details on this yet, but stay on the lookout for any progress!

I want to thank you again for your continued patience and support as I work hard to develop Maze Burrow into an enjoyable puzzle game. It has come far from the first iteration released over half a year ago. Feedback was very positive for v0.5 at a recent local playtest, and I can't wait to get it into even more players' hands. Keep burrowing!