This post will detail new features, additions, and improvements in the first alpha build, v0.6. Let's get right to it!

The previous font was very wide, and only one large font size was used and scaled in many different ways. This caused artifacts when scaling text and overall made text harder to read. A new, more legible font has been added, and on top of that, the game uses multiple font sizes to prevent artifacts and make everything look nicer and cleaner!

v0.6 features a batch of new and improved object art! This includes every puzzle element the player interacts with, such as blocks, warps, and even the level portal!

As shown in the GIF, there's much greater visual clarity with the new art, objects look more distinct, and the portal's importance is further emphasized. You may have also noticed that the Echidna has a nifty new sleeping animation! All of these additions are a big step towards making the world feel more interesting and alive - as alive as a burrow can be, at least. 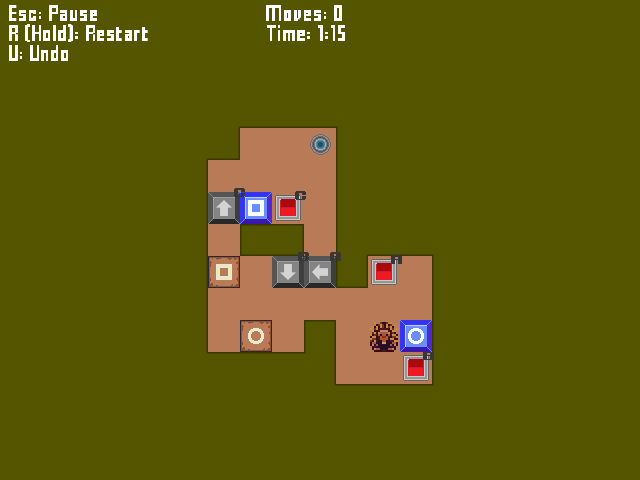 Portals have various teleportation effects in many games. Some of them materialize characters and others send them offscreen. With Maze Burrow, I wanted an effect that would tie into the theme of the game. This new animation shows the Echidna being sucked into the portal, and it turns out this also works nicely for having the Echidna burrow into the level as an entrance. I feel this new animation has much more appeal than the previous one.

Many players mentioned that they wanted more feedback when defeating a mole in the boss levels. I'm happy to say that defeating a mole will now cause the mole to flash red while the screen briefly shakes. The volume of the rock breaking is also louder in this instance. This should help make progressing through boss levels feel like more of an accomplishment. Besides, who doesn't like a good screen shake?

As promised in the pre-v0.5 update post, v0.6 has a grand total of 70 levels split into 7 worlds. Each world is focused on a specific puzzle element, and the boss levels at the end of each world have been redesigned to incorporate these elements (as seen in the GIF above)!

This format helps me more fully explore each puzzle element and how they're used in puzzles. For instance, the following new level, 1-8 Checkered, would previously have been much harder to incorporate if World 1 had to introduce another element, such as switches. 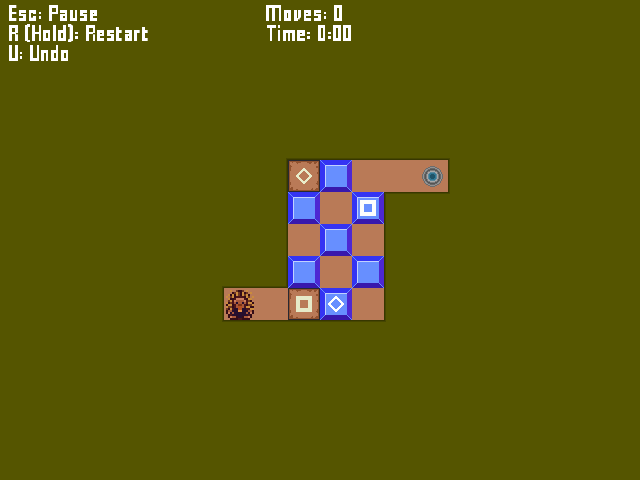 Additionally, most players had trouble with the previous 1-8, Mishmash, and I feel this new level focuses on the same concept of block management without being overwhelmingly difficult so early on. This is just one example: there are plenty of challenging new levels that use each puzzle element in different ways! 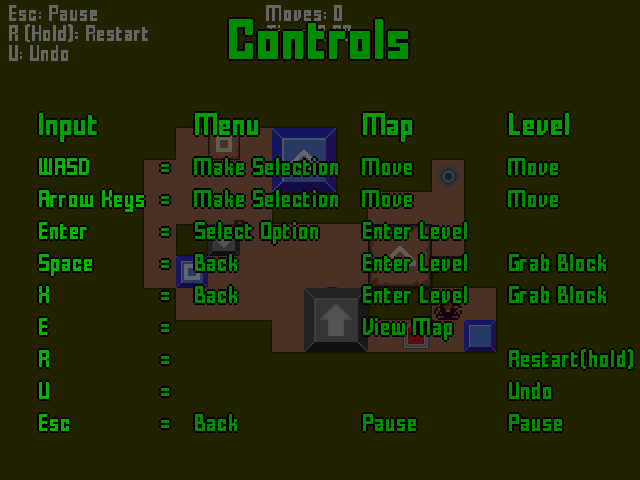 A brand new controls screen has been added, accessible from the title screen and pause menu. The controls list simply got too large to fit into the options menus, and I took this opportunity to show which context(s) each input is applicable. If you need to reference the controls, this is your one-stop shop.

The Echidna's movement speed both in levels and on the overworld has been increased even further, reducing downtime and letting players iterate on puzzles more rapidly. In addition, a brand new world jumping feature has been integrated into the Totals Screen!

Simply select a world other than the one you're on and hit Enter or Space to travel to it. The Totals Screen was the ideal spot for this since it already lets you see information about each world. Before coming up with this, I thought of several other concepts, one of which included having another overworld map dedicated to selecting each world. In the end, this made much more sense to me from both a design and usability perspective, especially since it eliminates even more traveling.

I spent a lot of time working on v0.6 and am confident these changes move Maze Burrow further in the right direction. I will be making builds for v0.6 closed in order to get more detailed, specific feedback. Open builds are great for determining how the game would play out, and I got a lot of amazing feedback and suggestions from players that helped make Maze Burrow what it is today. However, I believe that at this point, I need more specifics, including how certain levels can be improved, issues with game controls and pacing, and more. Details like these are harder to come by with a larger group of testers that usually play through only the first 1 or 2 worlds. I will also be participating in more local indie playtest sessions for further feedback.

I hope to have more specifics on distributing these closed builds soon. Thank you so much for your continued support, and I hope you enjoy these updates and improvements to Maze Burrow! Keep burrowing!